My Amygdala: A Love Story (Part I)

My Amygdala: A Love Story (Part I)

This is not your average love story, but I think it’s a love story nonetheless. It begins with desperation and jealousy, with insecurity and fear; fear of loss of love. It begins with horror at the thought of being shamed, humiliated. And it begins with pain; the pain that sits in your belly like an empty and bottomless cavern that can never be filled; the pain that makes you want to run, to fight, to scream, to be anywhere but right there.

We often hear it said that heartache is part of the price we pay for admission into this human drama. Some of us, it seems, has paid quite a hefty price.

I was born in Boston, Massachusetts that July. My father was, at the time, a physician at Children’s Hospital, and my mother was a lab assistant at BU medical center. We lived in an apartment in Watertown for a year. In 1964 we moved to the affluent Boston suburb of Wellesley. When I was four years old my parents adopted my sister, Ellen. When I was eight she died of cancer. Soon we welcomed two more children: Jane in 1970, and Susan in 1972, adopted and from Korea. I went to public elementary, middle, and high school. During those early years, I played baseball and football and I hunted for frogs in the pond by the woods. In the summers I stayed outside until dusk playing kick the can with the other kids in the neighborhood. As I got older I stopped playing sports and chose instead to smoke dope, pursue girls, and listen obsessively to The Rolling Stones, Steely Dan, and The Allman Brothers. All in all, the appearance on the surface of a fairly run-of-the-mill, middle-class upbringing and life.

I was a smart kid, but I did not apply myself in school. I chose television over homework, social life overstudies, physical pleasure over all else. By my junior year of high school, I was a daily pot smoker. I added alcohol in college as another daily refuge, and if I’m being honest I should probably include sex, shopping and exercise to my list of painkillers. In college, I discovered my intellect, political activism, and the Grateful Dead; along the way I also became acquainted with some new friends: anxiety, panic, and depression. I graduated from college in 1985 with no plan and less money. I soon thereafter fell into teaching as a would-be profession, and some thirty years later still call the high school classroom my home.

During my childhood, my parents were present, and not. My father worked sixty hours a week. To me, he often seemed overwhelmed and angry. I avoided him. As the years went on his obsessive behavior and frustration colored all of our interactions. My mother struggled to feel relevant. She was forever seeking out ways to be seen: participating in town government, carrying out political crusades on behalf of her children, exploring new professions to fill her days. A woman who had suffered her own struggles during childhood, she found it hard to connect with me in a way that left me reassured, knowing that I was intrinsically valuable and lovable. They were good parents. They provided for us, spent time with us. But the blind spots were significant. And while it was perhaps a fairly typical childhood, it was also a childhood marked by individual and family trauma, suffused with disconnection and loneliness, and shaded by dysfunction and eventual addiction.

And so I grew into a young man driven by fears of abandonment and often crippled by insecurity. I adapted by becoming a people-pleaser and a chameleon. I had little to no capacity to endure even the tiniest bit of emotional discomfort. I lacked a sense of true attachment to a loving caregiver, to anyone really. And as a teenager and into my twenties, actual empathy for others was decidedly incomprehensible to me. Save for some true moments of grace, I was I believe on my way to living a life of unbounded narcissism and sociopathology.

By the time my late twenties rolled around, I was suffering terribly. I couldn’t navigate the tumultuous seas and searing pain and gut-wrenching feelings of homesickness that accompanied failed love affairs, and so I remained both doggedly single and self-serving promiscuous. I couldn’t manage the feelings of shame and embarrassment that I experienced when reprimanded for less-than-stellar performance at work, and thus my stints with employers were marked by attempts at perfectionism and by the musings of a sycophant. When neither worked, I quit. To be honest and in retrospect, I’m not sure I realized just how bad things were, as for me this suffering, this mess of this existence, was my normal. I had become habituated to psychic pain and single-mindedly dedicated to its avoidance.

And then, a moment of grace: In the fall of 1991, I fell apart. My then-girlfriend moved to Germany and we broke up via the U.S. Mail. The pain I felt seemed unbearable. It was all I could do to hold on and drive myself to a psychiatrist’s office in Dallas, Texas, my home at the time. Frankly, I thought that he would take one look at me and have me committed. He didn’t. After our hour together he informed me that I was an alcoholic and that I needed to go to Alcoholics Anonymous — ninety meetings in ninety days, he said. Even though I had quit drinking some years earlier, I offered no protest. I was willing to try anything. I didn’t want to die, but I couldn’t go on living like this much longer.

And so I started going to AA meetings, often two to three meetings a day. I read every self-help book I could get my hands on. I meditated, began practicing Buddhism. You name it, I dove in. I attacked recovery and self-help with an almost manic obsessiveness. The pursuit of well-being became my raison d’être. Jump ahead thirty years, and today I can assert that I have, actually and in fact, read every self-help book ever written. I am the Will Hunting of introspection (without the genius part, unfortunately). I have worked with therapists, life coaches, and faith healers. I have decades of sobriety on my life’s résumé. I have gone on vision quests, taught meditation to my students, and become the teacher in schools who exudes a sense of equanimity and compassion. I have built a depth of self-awareness and meta-cognitive practice that would surely be the envy of many-a spiritual practitioner and social worker. To the casual acquaintance and passer-by, I appear to be the model of mental health.

Here’s where the story takes a most important turn.

Two years ago I met Vee, my now fiancée. She’s really something, and I feel lucky to be with her today. It has been a truly lovely two years — and, it has also been two of the most painful years of my life. All of the recovery and accumulation of encyclopedic self-help knowledge has done little to mitigate the depth of suffering I have felt, I still at times feel, when it comes to my fears of abandonment, my insecurity, my cavernous feelings of unlovability. The feelings are familiar, of course. The memories of failed romances with Linda, with Hillary, with Heather, are visceral. I know these feelings. They are old friends. The desperation, the clinging, the fear of clinging, the jealousy, the self-loathing, the homesick pain that time and again bore a hole through my belly. On a thousand occasions, my brain has urged me, compelled me, begged me, like I have so many times before, to flee for my life. But this time has also been different. I so very much want love. I so very much want to be with Vee.

One night back in 2018 Vee and I were driving to see a concert, and on the way down to the show, she mentioned that she and her ex-boyfriend Chris were going to have breakfast the next day. Now, I know Chris. He’s a perfectly nice man. I like him. She and Chris remain good friends. No problem at all. But on this night, when Vee told me about their breakfast date, I fell apart. I didn’t rage — that’s not my modus operandi. I became withdrawn and quiet. The pain I felt was overwhelming. When I would look at Vee that evening I didn’t recognize her. I was completely disoriented. I was awash in feelings of homesickness, of gut-wrenching despair. My mind tried to think its way out of these deathly feelings, but it couldn’t. And here I was, fifty-six years old, deeply in love, and the impulse that felt most powerful at the moment was to go home, pack up and leave, to run for my life. I didn’t. Instead, I went back to my old standby. I went back to the books. And, well, it turns out I hadn’t read all of the self-help books out there.

This time was different.

Part II will be coming next week with what I discovered, what I know today, and how certain daily actions and practices have changed my life.

Guest Post Disclaimer: Any and all information shared in this blog post, written by the guest blogger, is intended for educational and informational purposes only. Nothing in this blog post, nor any content on CPTSDfoundation.org, is a supplement for or supersedes the relationship and direction of your medical or mental health providers. Thoughts, ideas, or opinions expressed by the writer of this guest blog do not necessarily reflect those of CPTSD Foundation. For more information, see our Privacy Policy and Full Disclaimer. 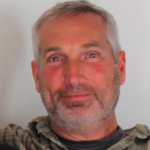 I’m almost 58 and live in the hills of Southern Vermont. I’m engaged to a woman worthy of sainthood, have two children from my first marriage and five step-daughter equivalents, teach history at a small private high school, and sing Grateful Dead songs in the shower. All in all, a pretty wonderful life.